As I stood behind him, with his computer in front of him, his piano keyboard to the left and his music stand to the right, I got to hear a song that my great, great grandfather wrote in the days of the horse and buggy, a song that had never been heard by any living member of my family, despite the fact that my GG grandfather was a celebrated musician and composer in his time.

In recent years I have been spending the bulk of my visits to my dad’s home organizing Dad’s family archives with a view toward making his collection more accessible to our extended family, known and unknown.  Over the last few decades, Dad had collected boxes and files full of clippings, letters, photographs and memorabilia.

Among the boxes was one containing original, handwritten sheet music from Thomas Harry Hinton (the aforementioned forebear), as well as a selection of his published music.  Some of the sheet music was so old that the pages were crumbling around the edges.

We’d actually heard a lot about Professor Hinton over the years and had a number of photographs of him, as well as other tokens.

We knew that came from Birmingham, England and he’d been a concert pianist, having toured Europe accompanying an opera singer.  He’d also taught music at a conservatory in upstate New York, and had been an orchestra director in Syracuse.  And he’d been a composer.  While we were aware that he had been quite accomplished, we’d never actually heard his music!

My dad is 87 years old now and all this family history means a lot to him.  Professor Hinton’s work has been of particular interest because the ensuing generations of his family had carried on the musical thread, right down to my father’s father, who began his adult life as a professional violinist.  Now, my father’s one regret in life is that he never learned to play an instrument (the lacrosse stick was as close as he got), but he did nurture and develop a very deep love of classical music.  So this collection of sheet music from Thomas Harry Hinton fascinated him.

I visited my dad in February and continued work on the family archives, uploading photos to the ancestral Facebook page I’d opened, as well as uploading information and photos to our Ancestry.com files.  As I was going through this box of sheet music I thought: wouldn’t it be wonderful to actually hear some of this music??  I wonder if I could make that happen…”  And then, the light bulb went off: I could post a service request on the Cville TimeBank site and see what comes up!

What (who) came up was violinist, composer, music teacher and Cville TimeBanker, Philip Clark!  I met him at Shenadoah Joe’s, my box of tattered sheet music in hand.  He leafed through the pages, listening to my story, considering the possibilities.  At the end of the hour he left with several of the songs and a plan to bring at least one of them to life.  He would input the music to his computer, note by note, using a program called “Finale,” which would then play the music back to us.

That plan came to fruition last week when Philip’s computer played one of my great, great grandfather’s songs, “Sunrise,” for me.  I made a rudimentary recording of it with my android phone and sent it to my dad.  You can imagine his delight upon actually hearing some of the music that had been waiting silently in drawers and boxes for nearly 150 years.   (Want to hear it?  We’ve uploaded the audio/video here.) 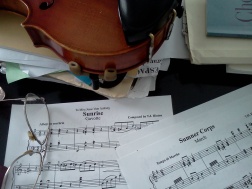 Thank you to Philip Clark and to Cville TimeBank for making this family dream come true!

View all posts by KKinCville

Donate now – not all our expenses can be paid in timedollars!

At a Repair Café, folks bring their broken stuff to be repaired by volunteers for free! We're BACK in August/September 2022.

Error: Twitter did not respond. Please wait a few minutes and refresh this page.