Overwhelm.  Ever had it?  Surely you’ve felt it at some point.  For me, it’s the force that causes me to avoid a seemingly monstrous task, instead of just diving in and getting it done.  You know that thing on your to do list?  More likely, it’s on the ‘to do someday when I have the time…. the energy…. and the inclination’ list, which is an entirely different beast.  It’s a mental inventory of the things I’d like the magic fairy to wave her wand and make happen.  If I don’t get these things done, the world won’t end.  But they don’t resolve on their own.  They’re still there.  Nagging.

So, a week ago at a potluck meeting, when TimeBankers were each asked to come up with a service request we could post on Cville.timebanks.org, I started thinking about that ‘other’ list, and I mentioned my car.  My poor, 14 year old car — and the disaster area within.  It’s been years since my car was cleaned out.  Not ‘washed’, mind you, because that’s happened a few times.  The interior is the problem.

If you know me, you know that I’m very involved in the City Market.  I’ve organized a summer long canning program, and a large annual farm tour — and they’ve left a mark on my car.  Oh, and I adopted a dog last year, and I think she’s been the only other passenger in my car for months.  My car has been filled with canning jars, tour programs, signage, coupons, tote bags, and dog hair.  It’s ugly — and the full body shiver brought on by the thought of dealing with the mess has stymied any attempt to actually DO it.

As soon as I brought it up – another hand shot up in the group.  Joanie’s hand.  Joanie, who has her fingers in more community pies that you can imagine, felt my pain instantly.  Her car was in a similar state, with the added bonus of containing floor mats that spent some time in a llama barn.

Within minutes, we’d hatched a plan to do a simultaneous car care session. Joanie would bring her cluttered, dirty car over to my house to commiserate with my cluttered, dirty car — and then we’d tackle the job: together.  And then the magical shift happened.  Momentum took over.  Obstacle number one was conquered: we put our car clean-out on our calendars. It was official.  It was going to happen.  Finally. 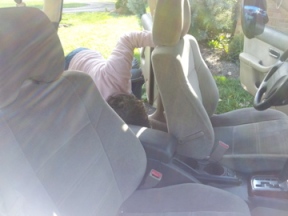 On Saturday afternoon, Joanie and her car (“Little B”) came over, and out came the tools:  trash can, shop vac, garden hose, cleaning rags, window cleaner, and four elbows’ worth of grease.   And you know what?  It wasn’t awful – it was awfully gratifying. I sorted, tossed, vacuumed and wiped, trading off tools with Joanie as we each worked on our own car.  It took about two and a half hours, and the deed was done.  (You’ll notice there are no “before” pictures – that’s on purpose.  Suffice it to say that is was u-g-l-y.)

And congratulations to Joanie who found several dollars’ worth of spare change hiding out in the seats and on the floorboards.

Now, this “exchange” wasn’t really an exchange in the true timebanker’s sense.  Each of us attended to our own vehicle, so it wasn’t really time being provided to another member.  It was, however, the great momentum builder – and in the 24 hours following the great car clean-out, I’ve tackled two closets, and the back porch.  Yeah… it’s a slippery slope.

View all posts by KKinCville

Donate now – not all our expenses can be paid in timedollars!

At a Repair Café, folks bring their broken stuff to be repaired by volunteers for free! We're BACK in August/September 2022.

Error: Twitter did not respond. Please wait a few minutes and refresh this page.